Although 2016 has been seemingly rough on so many people, I can honestly say it has been one of the best years so far. I basically quit my former life to wander the earth and it has changed me forever. The last 7 months alone, has taught me more about the world and myself than the last 3 decades.

When I started, I had no idea what I was doing. All I knew was that I was going. I was going somewhere; NOT standing still, not treading water or running on a treadmill. Moving in a direction that I had sadly become estranged from. I set out on a journey with no plan, no agenda. Just me.

I started in Iceland where I met a lovely woman who taught me to be less wasteful and more conscience, to never give up and to have the courage to try something new. I learned that sharing a car with total strangers isn’t a weird thing at all. In England I remembered how to be a kid. I remembered that partying too hard and getting in trouble for kicking a football around on the royal lawn was not just part of the journey but one of life. Oh and of course, how much I like cloudy cider.

Africa. Oh Africa. This is where the real lessens began. I learned what racism felt like on the receiving end. I learned that racism is also very real and very alive. I learned to not see color, not to see fault but to only see the person in front of you, I learned to not judge a book by it’s cover. I was also given the opportunity to reciprocate that ideal; to show others to not be afraid of those who don’t look like you (white people covered in tattoos). I learned the value of life, of water and of silence. I learned how to communicate (or more importantly) to listen. In Africa, I learned what Privilege was.

Everyone reading this should visit a village, should get involved with charity, should do something nice for someone they don’t know (or do know), listen to a homeless person or your cab driver.

In Dubai I learned that it’s really hot in the desert and not to make assumptions. I learned that I don’t know very much about Islam or Muslims for that matter. I learned to not be afraid and to embrace something I do not understand or necessarily agree with. I learned that the “call to prayer” is beautiful.

Nepal will forever be my home. The Himalayas and the Kathmandu Valley have unquestionably set a precedence. The lovely people, the colorful traditions, the absurdity…all of it. I haven’t been to a place even close to as amazing as Nepal. The more I look back at those 6 weeks the more I realize the real impact that tiny little country made on me. I’m a kinder, more resilient, thoughtful person because of Nepal. Everyone reading this should visit a village, should get involved with charity, should do something nice for someone they don’t know (or do know), listen to a homeless person or your cab driver.  It’ll change your life, trust me. I learned about selflessness and perspective. I learned that bacteria won’t kill you and sexualizing nudity is ridiculous. I learned about socialism and coffee, ambivalence and rhetoric as well as how to bargain and how far a smile will get you.  I learned that somethings are just not questioned, it’s called faith. I learned about adaptation and struggle. I was told “How we treat each other now, is how our children will treat one another”. I learned to let things go (sort of). But most importantly, I learned about compassion and Dhat Bhat Power…24 Hour. 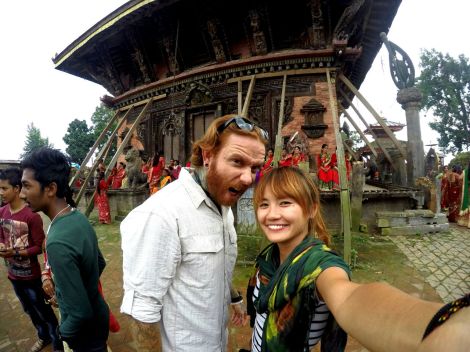 Malaysia taught me that a small amount of extravagance was good for your soul and the importance of creativity.

And of course New Zealand. I have an undeniably strong connection with New Zealand. Every time I’m there I feel like I’m where I am supposed to be. In New Zealand I learned about friendship, how disappointed the world is at the US and sometimes, some weed, makes you feel weird. I learned that the earth revolves around the sun and not the other way around (that’s a metaphor). I learned that perception is everything.

Nothing about this trip would have been anything to me if it wasn’t for the people I met, the friends I made, the couches I slept on, the shared beds and rooms. The generosity I was shown was so monumental, I won’t even have begun to chip away at that karmic debt, before I kick the bucket.

To all the people I met, the friends I made and to those innocents caught up in some of my shenanigans. Thank you and here’s to another trip around the sun!