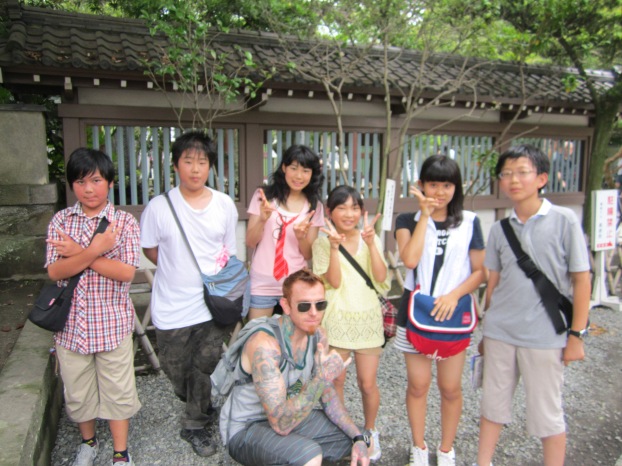 Being a traveling tattoo artist gives me a unique opportunity to experience foreign places from the “other side”. That “other side” being from a more local perspective and not that of just a tourist. Now don’t get me wrong, there is no crime in being “just a tourist”. The fact that you have traveled outside of your “world” and experiencing a different place is fantastic! Especially since less than half of the American population (about 42% in 2014 according to The Expeditioner) even own a valid passport. Now before I digress, what i meant by being a “just a tourist” is that a lot of travelers stay in over priced hotels, take expensive tours, stand in ridiculous lines to see attractions and arrive into ports via cruise ship only to see only the inflated, capitalist laden, rip off and high crime areas of those cites and countries that they have always dreamed of visiting. Whether it be due to lack of experience, knowledge, fear or you were just dragged there by a significant other or parent, you aren’t getting to see the real true, charm of those places. Being a foreigner is not an easy thing to do. It’s extremely intimidating to say the least. I will try to give tips and insights (based off of my experiences and mistakes) on how to weave in and out of the locals and tourists. A view from the inside and not a just spectator is something that not a lot of people get to do. My goal is to give you that experience via text and pictures and maybe inspire you to get out there and explore just a little more. Or better yet, plan your first trip ever! Even if you aren’t infected with wanderlust, I hope that I can inspire you to just get out side of your comfort zone and proceed to becoming the best version of yourself that you can. Don’t fall for the bull shit and get stuck in the tourist traps.  Lets be honest here, no one is going to visit Rome and not see the Colosseum, or Paris and not see the Eiffel Tower. Those sights are a very big reason most people travel (myself included). Just don’t be fooled by the merchants around those places. take a walk down a small street, get lost….you might just find something amazing. Only through the kindness of local tattoo shops, tattoo enthusiasts and fitness professionals, am I allowed to do this. To them I am forever grateful and will do my best to give them all proper credit for all of my (mis)adventures.

Let’s get started with a little about me. In 1995 I left my home for a foreign land to fight for my country. I was just a kid. At the ripe age of 18 and being somewhere with a different language, a different set of rules and different climate was not just terrifying, it was liberating and exciting! Immediately, was I struck with a strong impulse to explore, to travel…a wanderlust. Then, I was attached to the Naval Security Group Activity (NSGA), Marine Support Battalion, Company L in Guantanamo Bay, Cuba for about a year and a half. And in that short amount of time, I learned to SCUBA (open water terrifies me, even to this day), I blew shit up, I drank copious amounts of alcohol and I traveled quite often while on leave, to places such as Puerto Rico and Jamaica. Unfortunately, the only exposure I ever had to the Cubans was seeing the men standing on the other side of the fence waiting for an excuse to engage and the occasional “defector” we had to send back. Lets fast forward shall we? In 1999 I got a job as a civilian contractor for the Army at Fort Buchanan in San Juan, Puerto Rico. I wasn’t there all that long (I actually don’t even remember the exact amount of time) before I decided that I didn’t want to be away from my family any longer and chose to move back to my birthplace, Reno. I was finished traveling. I was tired of beginning relationships just long enough to move on to the next. Not just emotionally but physically. I wanted to settle down and make a home (so I thought). It had been too many years away. After I returned home I went back to college and worked odd jobs here and there, all while trying to figure out a path for my life. It wasn’t until 2006 that I started tattooing.

Finally, a career that I knew I would never get bored with! A few years into tattooing we had a an out of town tattooer come do a “Guest Spot”. A Guest Spot is when a tattooer from out of town (or just from a different shop) comes and does tattoos at a hosting shop. I was blown away by this idea. I worked tirelessly for the next couple years so that I would be good enough so that other shops to let me sit in and tattoo. Once I did my first guest spot I was hooked!! Since 2009 I have tattooed in countless states, Germany, Australia, New Zealand, Puerto Rico and JAPAN! Every single time I have learned something not of my trade but of myself and of other people and cultures. It has taught me patience, resilience, humility, and most importantly, tolerance…tolerance for others actions, ideals, beliefs and cultural differences. This is not to say that I am perfect or that I am some enlightened being, but that I am imperfect, I do make mistakes and that I realize these things and I am conscious and deliberate in my attempt to be a better person. I really hope that you enjoy my writing and I can somehow inspire you. Please spread the word and LETS GET WEIRD!!